/* This code is for browsers that do not allow javascript. It refreshes the current location to the URL. */ /* Sets a refresh rate for content. Content refreshes after 10 seconds. */ 301 moved permanently

We apologize for the inconvenience. 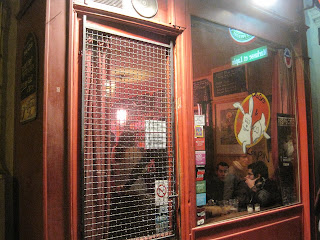 I'll admit it: I can be a control freak sometimes. But, I've been a busy girl lately so this week I decided to abdicate responsibility and let Mr Matt choose our cocktail bar.

He sent me a link for le Marlusse and Lapin, which has a big cozy looking bed in the backroom for lounging. Cute gimmick. But, the fact that it was just a few minutes' walk from home sealed the deal. I figured if the cocktails were good, I could stay awhile and easily toddle right home after. I figured if the cocktails were bad, I could blame it all on Matt (and still easily toddle home). win/win! 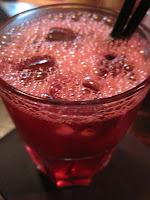 I arrived at 7pm to find a busy little bar banging with Montmartre youngsters. The bed was piled high with bodies so I took a stool at the bar. The 7 Euros cocktail menu featured 11 drinks, 8 of which were vodka based. I'm not even sure if they stock gin because the bartender looked at me like I was crazy and shook her head suspiciously when I explained what I wanted. Instead, I took the "Jacky in Love" (Jack Daniels, Amaretto & Cranberry Juice) which turned out to be predominately cranberry juice.

While the kids congregated at the back, the stools next to me were occupied by a smattering of older artsy/character types holding forth and having loud pseudo intellectual debates in Frenglish with each other and then no one in particular - and even in a one-sided fashion with me. While this could be annoying to some, I actually thought it was very appropriate for a bar on this famous butte. 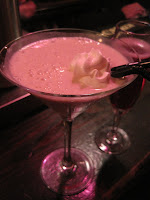 Matt and Lindsey both took drinks on the sweet side. Matt's Lapin was a sugary swamp with a bit of creamy whipped fluff on top (some combination of baileys, cream and possibly amaretto). Lindsey followed suit with a Lapin as well. For Matt's second he took a chocolatta , which was similar but with chocolate smeared on the inside of the glass. They weren't unhappy with their drinks, but they weren't for me.

I was hard-pressed to choose a second from the un-Forest-friendly menu, and then something caught my eye: an absinthe fountain. Problem solved. 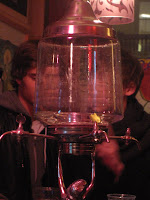 and proceeded with the process, and now I shall nitpick. The three things I didn't like about her method:

1. She didn't put only fresh water in the fountain. There were dregs left over from a prior session (which could have been weeks ago for all I knew). She left it there and just threw in a bit more water and ice.

3. She louched it too quickly. 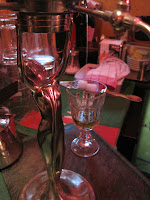 Admittedly, I'm not an Absinthe professional. But I do like ritual. And, with my control freak tendancies that means ritual done right, i.e. MY way! (don't mind me, Readers, I'm feeling a bit saucy today, we'll be back to your regularly scheduled Pleasant Forest after the holidays.)

However, I do have to give this lady props. She was handling an onslaught of pushy customers ordering beer after beer and she probably thought "Who's' this pretentious git wanting the whole absinthe show at a time like this?" But, she did it anyway, and she was very sweet about it.

The boisterous crowds just kept coming - to the point of being uncomfortable. And, that's when I realized that almost every drink being served behind the bar was a pint of beer in a plastic cup. It was Happy Hour with 2.60 pints until 8pm. Ah ha. There was a time when this might have been a draw for me. But, I'm just getting too old and picky to put up with being jostled, jolted and groped for a pint of cheap Pelforths. So, with a wave of tipsy toppling kiddies, we made our way for the door and called our cocktail night to a close.

I would have been so out of there at that point.....

vodka rules...tough for me.
i think she got mixed up, either with the coffee grain or the rhum seafarer drink!

if you like the absinthe ritual, a nice place for it, with a huge choice of absinthes, is the Fée Verte, rue de la Roquette. i's an old fashionned café that does not look run-down. Fée Verte used to be the nickname given to absinthe

Columbine...sounds good. I'll put it on my list of places to try for 2010 (I'm running out of pre-holiday drinking days for this year!) :)

52martinis follows me in my search for the finest cocktails in Paris. Every Wednesday, I try a new place. I start with a martini for a standard of comparison and then usually order a second. Occasionally, I'll blog on other bars outside of my Wednesday Cocktail Adventures as well. Got a bar you think makes great drinks? Let me know, I'd love to try it!